In 1972 Academic Vice President Hobert Burns officially established the Women's Studies Program (WSP) at San José State University. An ad hoc committee was formed and included Dr. Fauneil (Fanny) Rinn of the Political Science Department, Dr. Billie Jensen of the History Department, and Dr. Sybil Weir of the English Department. With the rise of campus protests against traditional academic curriculum and the earlier success of the African American Studies Program, the SJSU Administration readily supported the formation of the WSP. The combined efforts of the Administration, faculty, and students launched one of the first women's studies programs in the U.S.

Like other women studies programs, the SJSU program worked to solidify its place as an academic discipline. When the National Women's Studies Association first formed in San Francisco in 1977, the WSP organized the professional association's founding convention, which drew close to two thousand participants. The WSP went on to organize and convene other conferences on women's studies, including the 1982 "Higher Education for Women in the 1980s Conference." This conference brought together educators from the northern CSU campuses to discuss furthering women's studies education. At the same time, the WSP produced a significant body of interdisciplinary scholarship, from monographs, newsletters, conference papers, scholarly journal articles, newspaper articles, textbooks, and children's books.

During the 1980s, the WSP, like many other university programs, felt pressure from increasing financial cutbacks and reduced faculty allocations, while still attempting to sustain its curricular responsibilities. At this time, the WSP courses included several general education classes and had high enrollment rates. In 1981 they proposed the establishment of a B.A and, in 1987, an M.A. in women's studies, but without success. In 1987, the WSP, along with African American Studies, Mexican American Studies, Asian American Studies, and Sociology, were combined together into a working consortium under the administration of the College of Social Science. Contention soon followed because the new formation did not allow the individual programs representation in the Academic Senate, and especially on that body's Curriculum Committee. After a series of administrative realignments, the WSP became a part of the Social Science Department under the College of Social Sciences; though African American Studies, Mexican American Studies and Sociology formed separate departments.

The Women's Studies Program continues to offer a multidisciplinary curriculum balancing the traditional academic and male-centered perspective with new research and study in the field of women's experience.

Materials from the Women's Studies Dept.

These flyers and brochures are from the SJSU Women's Studies Program Records, available at SJSU's Special Collections & Archives. 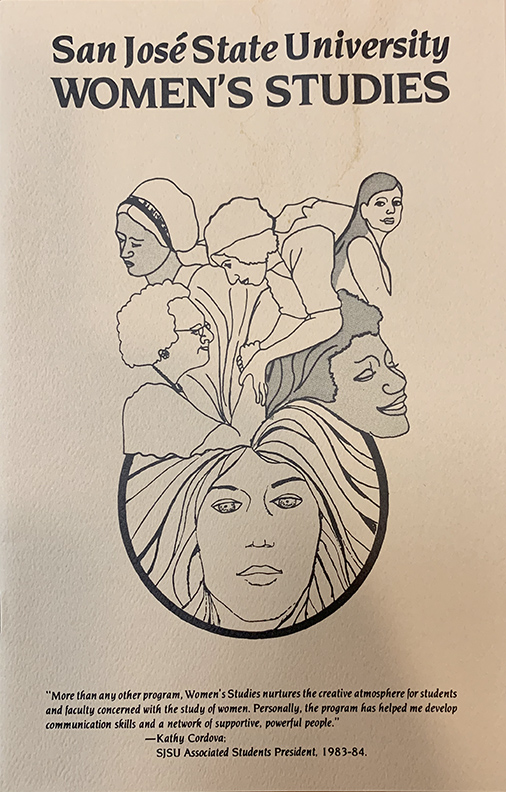 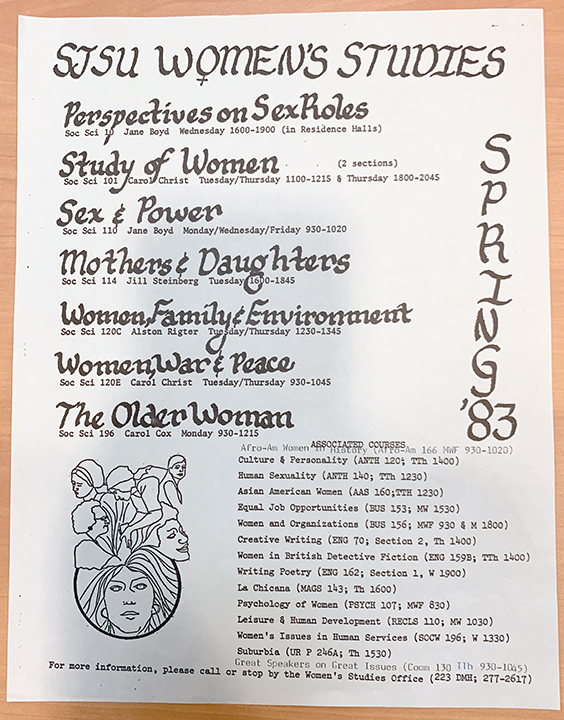