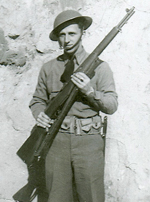 SJSU Special Collections (5th floor) has a number of collections relating to both civilian and military aspects from the era of WWII.  Among them are the following:

-  War Poster Collection - containing propaganda war posters from the US and other nations.

-  Charles B. Burdick Military History Collection - containing the research files of this distinguished SJSU Professor and military historian.  the WWII portion of this collection contains publications form the German High Command, reports from other Allied and Axis governments, the legal proceedings from the International Military Tribunal for the Far East (war crimes trials), and a large quantity of other ephemera, maps, newspaper clippings, reports and scrapbooks.

-  Willard E. Schmidt Collection - containing the papers of Willard Schmidt, the Chief of Internal Security for the War Relocation Authority and the Tule Lake Internment/Segregation Camp.  Tule Lake was set aside for handling the most "suspect" of Japanese-Americans, and this collection contains the administrative papers for the camp as well as a collection of photographs.

-  Civilian Conservation Corps (CCC) Collection -  The CCC was established by Franklin Roosevelt as a worrk relief program during the Great Depression.  Young men, 18 to 24 years of age, were engaged to work on the management of natural resources in National Parks and on other public lands.  They constructed roads, built trails, planted trees, and in the meantime earned a wage and contributed to the environmental health of the nation.  This collection contains documentation on this program, particularly from the period 1939 to 1945.

BIOGRAPHICAL DICTIONARY OF WORLD WAR II, by Mark Boatner.  This volume contains short biographical sketches of many of the major figures in the Second World War.  (D736 .B63 1996, 6th floor)

JAPAN'S IMPERIAL ARMY: ITS RISE AND FALL, 1853-1945, by Edward J. Drea.  This excellent volume traces the development of the Japanese Army from the end of the Tokugawa shogunate, through the Meiji, Taisho and early Showa eras.  In the process, it explains the rise of militaristic and expansionist tendencies which ultimately led to the war in the Pacific.  (DS838.7 D74 2009, 6th floor)

HISTORY OF UNITED STATES NAVAL OPERATIONS IN WORLD WAR II, by Samuel Eliot Morison.  This is the official 15 volume history of the U.S. Navy in World War II written by the foremost historian in the field.  Included are operations worldwide.  (940.545 Morison, 3rd floor)

GUIDES TO GERMAN RECORDS MICROFILMED AT ALEXANDRIA, VA., National Archives and Records Service.  This series was begun shortly after WWII by the Committee for the Study of War Documents of the American Historical Association and later continued the National Archives, and consists of hundreds of reels of microfilm of original German documents, including records of the German Army, Navy, Air Force, SS and other groups at virtually all levels of command.  This huge collection of primary source material is accessible through finding guides located in the Lower Level of the Library (King Microform Reference Lower Level D735 .A58), while the actual microfilm is located in cabinets in the same area (King Microfilm Lower Level 943 A512).

UNITED STATES ARMY IN WORLD WAR II.  Published by the War Department, this 64 volume series covers all aspects of the operations carried out by the U.S. Army in the course of WWII.  This classic set ( known as the "Green Books") also comes with a Reader's Guide to assist researchers in locating needed material.  (D769 .A533, 6th floor)  An electronic version is also available - see below.

HITLER AND HIS GENERALS: MILITARY CONFERENCES 1942-1945; THE FIRST COMPLETE STENOGRAPHIC RECORD OF THE MILITARY SITUATION CONFERENCES, FROM STALINGRAD TO BERLIN, edited by David Glantz.  This valuable resource contains English translations of the actual minutes taken of the military situational reports given to Hitler during the period indicated.  (D 757 .H5813 2003x, 6th floor)

The Veterans Services Office, as a part of the Office of the Registrar at SJSU, assists veterans with state and federal education benefit programs.  More information can be found on their website.